One of the main issues with designing a linear actuator is the complex compromise between self-lock and the efficiency of the actuator. Below follows an explanation of this compromise. 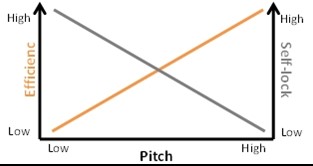 One of the main issues with designing a linear actuator is the complex compromise between self-lock (the ability to handle loads when stopped) and the efficiency of the actuator (how much current is needed to lift a certain load at a certain speed).   For the most common configuration containing a worm gear, the self-lock is created by the worm gear itself and the screw/nut combination.  As the pitch increases, the efficiency increases, but the self-lock ability will decrease.  And as you decrease the pitch, efficiency will be lost, with the gain of friction to self-lock.

There are three types of basic self-lock abilities to consider:

The first two are straightforward and can be measured, but the transient type is difficult for several reasons. One is that a transient load is hard to define; it varies from application to application. 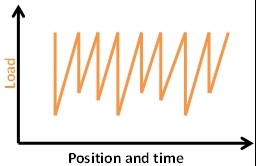 One example: An actuator could handle a dynamic and static self-lock load equal to 5 kN.  If in this example the actuator carries a static load of 1kN and experiences an added short transient (-100N) once every second, this actuator will overtime lose positioning.  At first, this scenario looks to be acceptable since it’s well below the specified load threshold, but with repeated transient movements it will incrementally and slowly move the load. Every time the self-locking components (worm gear and nut/screw) are hit with the negative load, the self-lock will disengage and then engage again when load returns to 1 kN.  Every cycle like this involves a risk of losing some fraction of a turn, and it adds up to position creep.

It’s a common misconception that these problems are solved by short-circuiting the motor to stop. However, this is only partly true. Short-circuiting a DC motor results in a very efficient brake, yes, but the brake torque is proportional to speed (i.e. when speed is close to zero, the brake torque is close to zero as well). This means that every situation where transient loads create position creep, a short-circuited motor may slow the process down, but position creep will never be completely resolved.

Self-lock and efficiency – a new approach

To resolve this “efficiency vs. self-lock problem”, REAC has developed a new type of brake that provides a solution to poor self-lock. This new solution offers several advantages:

When combined with motor short-circuit brake, the result is a solution that can handle all cases.

This technology has been implemented in the RE7000 with market-leading performance.